Slazenger is one of the longest established sporting brands in the world with almost 150 years of global presence, on playing fields and major sporting arenas across the world, in tennis, cricket, hockey, swimming and golf. In 1902 Slazenger was appointed the official tennis ball supplier for Wimbledon, a partnership that is now in its 113th year and is the longest running sporting sponsorship in history. Slazenger tennis balls were first requested to be used at Wimbledon by champion tennis players. Slazenger since became the official Wimbledon tennis ball supplier in 1902. Eighty-four years later, the yellow Slazenger balls were first introduced at Wimbledon.

Today, Slazenger continues to be a major international sports brand synonymous with performance, style and expertise. Slazenger is endorsed by ambassadors such as Tim Henman and English cricketer James Anderson. 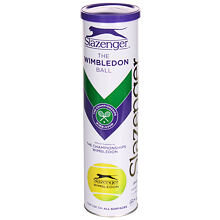 High-quality ball for all types of surfaces. About 17% colorful than other balls, extraordinary features.