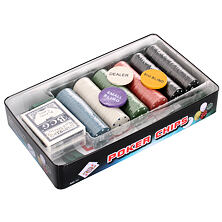 The first predecessor of the poker is considered to be a Persian game As Nas. It was played with 25 cards of five different colours. French sailors learned As Nas from the Persians  and imported it to Europe. From this Persian game other games developed which gave the name to the poker.

Poker is a card game for 2-10 players holding a certain number of cards and chips. The aim of the game is to make one of many card combinations. They decide on the loss or gain. Not only the quality of the card combination the player is holding in hand decides on the game, but also the appropriate tactics. 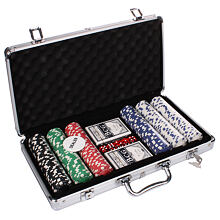 World-famous game in a practical case. Complete poker set with 300 chips for playing with friends and family. 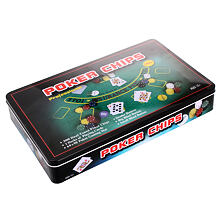 World popular game in a practical metal box. A complete poker set with 300 chips for play with friends and family.

A complete poker set with 500 chips for play with friends and family. World popular game in a practical metal box.